Tournaments of Madness and Death

Two Swords and Sorcery adventures for characters of Level 5. Also contains a guide to writing convention scenarios. Compatible with OSR Class/Level based games.

This book contains two self-contained adventures that can either be played as one-shots or dropped into a campaign game, for characters of Level 5 and a guide to running one-shot games as played at conventions. 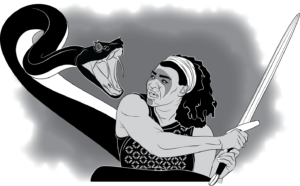 If this adventure module was an old school metal release from the 80s on some creaky little independent label, it would be one of those quirky split singles, where two bands would each have a side of the vinyl record.

On Side A is The Furnace. The Furnace was the first old school D&D adventure I ran at a convention., I initially ran the game using Labyrinth Lord, and the adventure is named after the convention it was run at, namely, Furnace which is held every October in Sheffield, UK. I ran it on Saturday night, which is now my annual slot for running OSR games, and despite the naysayers at the bar beforehand, who seemed threatened by my decision to run a game using a system they had left behind years ago, and my own almost paralysing bout of stage fright, we had a fantastic time. The precise details of the scenario have changed with time, and the current more polished Crypts and Things write-up is presented here.

Tearing up side B is The Tomb of the Evil Emperor. This was an outing of Crypts and Things as a convention game, just after the release of the first edition in 2012. I first run this adventure as a slightly boozy game at Continuum, a summer affair held bi-annually at Leicester University, which saw the bold adventurers race across the ruins of the Grand Debris, through the buried Imperial Complex, to a final confrontation with the shocking surprise of the true form of the Evil Emperor.

Two sides of the Crypts & Things convention experience. Madness both in the sense that the locations that make up the adventures aren’t your typical dungeon. The Furnace takes place on an artificial iron moon held up in the sky by magic, while Tomb is in a city crushed by a vengeful god using a meteor. Death because it was what faced the doomed world of Zarth if the adventurers failed in their mission to stop the Ultimate Evil that threatened the world, and because it was a genuine possibility given the cast of horrors they faced. All “good friendly violent fun in store for all” as the thrash metal band Exodus once sang on their song Toxic Waltz.

Finally, Dark, Delicious and Deadly is an insert, cunningly placed between the two adventures, that explains the method behind the madness of how I run convention games of Crypts and Things.

Although written specifically for Crypts and Things, an OSR game focused on the Swords and Sorcery genre, it can be used with any class/level based fantasy game.

US Letter format, 38 pages, black and white art by Daniel Barker (Monkey, Tales of the Reaching Moon) with a cover by David M.Wright.