Two hundred years ago humanity left an Earth that had been so overexploited by big business it could no longer support life. After another hundred years or so of terraforming the barely inhabitable worlds they fled to, so they were just like home, it was business as usual. Which means being under the economic yoke of immoral Corporations who will exploit anything and anybody make a profit.

Twenty years ago the Corporations made their first big mistake in pursuing their Agenda in a long, long time. They started fighting amongst themselves. The First Galactic War, as the Media-PRs all dramatically call it, was one big shark-fest. Big Corp ate little Corp until there were only three big corps in charge: Tri-Corp. Of course the man on the street was expected to pick up the bill for this war and this led to the mother of all recessions. This is where they made their second mistake. In the twenty years that the Corps abandoned whole colonies as “economically unviable” a whole generation grew up outside the corporate indoctrination (sorry education) programmes, since schools and most social funding were the first thing to get cut. A whole generation that grew up into unemployment and had to find a way to live outside the Corporate Wage Slave Culture the rest of the Consortium have to live in.

We grew up hard, mean and clever, not brainwashed and defeated like our parents. We’ve seen what damage the Corps have done to our world through design and wilful neglect. Now with the galactic economy on the upturn after the war the corps are back, telling us that they own us. They can try to flood the Data-Sphere with subliminals about how their “Project Darklight” is going to save us all, but my friend Sys-Squirrel has a thousand jammers roaming Virtual Reality. They can try and build their fortress headquarters down town, but the Semtex Girls are experts in demolition art. Their Puppets may be putting their corrupt claws into City Hall, where one good mayor had actually worked for the people, but me, Donahue McClusky, and my fellow Media Assassins are going to get the bottom of how they killed Mayor Goodwin and then blaze it across News-Net. They think they can bulldoze their way back into controlling our lives and selling us cheap. But I aint no commodity chummy. I’m a Cyberpunk, I live on the Edge and me and my friends are going to fight back against the suits and take our world back from them!”

Project Darklight is a rules-lite Cyberpunk Ruleplaying game, set in the space age of the 23rd Century.

The game uses the Wordplay system by Graham Spearing. This is a rules-light but delightfully crunchy set of rules that supports the inventiveness and creativity that good storytelling requires using single simple and flexible rules mechanic known as the Challenge, using normal six sided dice.

The game is currently available in PDF format via DriveThruRPG.com.

It will be availble in print in a couple of weeks.

Here’s a breakdown of the book:

How to create the person you will play during your game, otherwise known as a character, and the setting that they will be exploring and living in.

This chapter explores the Virtual Worlds of Project Darklight and what the characters can get up to there.

This chapter explains how the game system works. How dice are used to determine what happens when the outcome is less than clear. It is made up of two sections.

Depending on whether your group decides to run an Open or Closed game the following chapter may be the sole preserve of the Netmaster.

This chapter details the deep setting secrets, explains how to set up adventure and gives extra help for the Netmaster.

This short introductory adventure is ideal for new players and Netmasters.

The game is illustrated by Steven Austin, Jessheilds and Luigi Castellani. 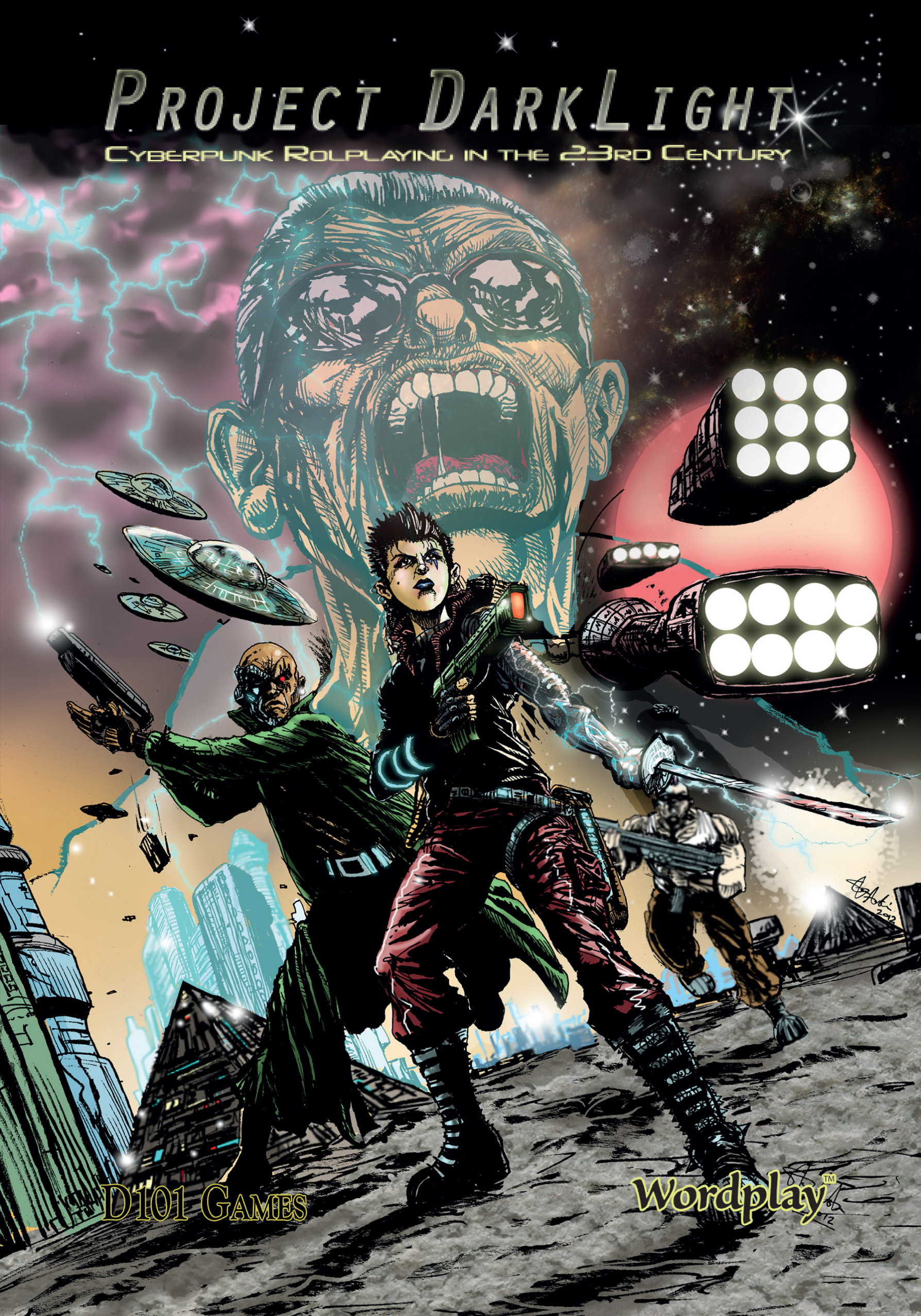