Swords Against the Shroud

Swords Against the Shroud is a Swords and Sorcery Role-Playing Game (S&S RPG). The players play genre-focused characters, Barbarians, Fighters, Thieves and Sorcerers, exploring the dying world of Zarth. A
a world that is subject to not only the worst effects of human greed and corruption but also the unwelcome attention of the demonic Others who come through the Shroud that separates Zarth from the hellish Other
Worlds, to feed on pain and misery.

In 86 A5 pages this self-contained rules book contains:

All formats come with a fully bookmarked Pdf with clickable cross-references.

The printed book comes in two formats. A standard edition softcover, with greyscale cover by John Ossoway, and a limited edition hardcover with a full-colour cover by Jon Hodgson, individually numbered and signed by the author. 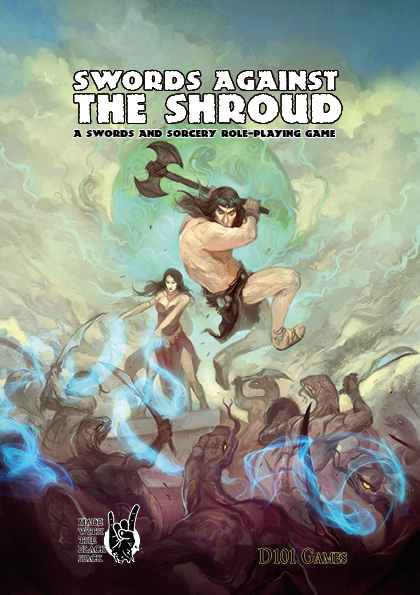 Cover for the limited edition hardcover by Jon Hodgson

Note both printed editions are currently on preorder and I expect them to be ready with the printers by mid-August.

There are no reviews yet.

Be the first to review “Swords Against the Shroud” Cancel reply