Did you miss the successful Reboot the Future Kickstarter that I ran back in November 2021?  It was a strange time of year to launch it, just before the Christmas spending spree, so if you missed out here it is again, complete with original pledge levels and rewards, until March 5th.

This Catchupstarter, which runs until March 5th, allows you to back the campaign at the original pledge levels and gain the same rewards as last year’s Kickstarter, some of which will not be available again.

Just pick the Pledge Level above which corresponds to the backer levels (see below for details).  Note this all links on this page either redirect to external sites, such as my To The Stars Blog, where the game is explained in detail, or Kickstarter campaign updates.

As well as the main rulebook the following Stretch Goals were been funded.

In addition, the following was added to the campaign, since we ran over Black Friday 😀

Note money raised here does not add to the Kickstarter total, so no more stretch goals will be funded.

The delivery date for the final book is April 2022.

The first draft is available now, so when you make your order you will be provided with a pdf download link.

I love cyberpunk, from the early days of the genre in 80s film and literature, through its heyday as the setting of various RPGs in the 90s.

By the early 2000s, I had played out the default setting of cyberpunks vs corps against an endless urban backdrop. I also found while the game systems started simple, they rapidly descended into twiddly complexity when you start working out the effects.

So Reboot the Future is my attempt to make the Cyberpunk game of my dreams.  I’ve pushed the usual near-future setting further into the space age by setting it in the year 2223.  I’m using Paul Mitchener’s Liminal system, which is simple and accessible, yet has some very clever rulings to give it meaningful depth both in a rules sense and to support roleplaying.

When I designed Reboot the Future, I had five design goals in mind, listed below.

Each of these five points links to a blog post that explains it in further detail.

Backer #1 Jim enjoyed playing Brain Dead at the Shopping Mall with me at Grogmeet 2021 recently wrote an actual play (with spoilers), which shares the fun.

And here’s my take on the same game, in a spoiler-free Narrator’s report

The main rule book in its standard edition is a hardcover US Digest format (i.e. 6 by 9 inches), 200-300 pages long. With a colour cover by Dan Barker, and black and white internal art by Jeshields.

There is also a signed and sent version and a limited edition cover, which are detailed below. 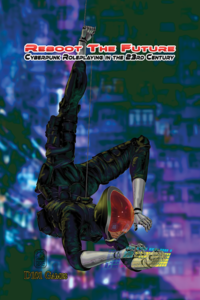 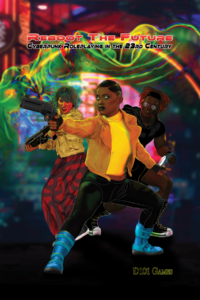 The book going to be available in four versions

These levels just get you the standard book in the format of your choosing (Pdf/POD or Signed and Sent), and all the stretch goals.

If you want the Cyber Monday Tales add-on (see Add-on section below for more details) back at the following backer levels.

The following levels get you the Limited Edition book, with Dan Barker’s new cover, signed and sent directly to you.

*Note any postage for print copies that I’m sending you directly is calculated and paid for via my web store, before I send it to you.

Here’s the list of Stretch Goals that were funded during the original Kickstarter campaign.

This is a collection of mini-adventures for the game, in pdf format. Each Cyber Monday Tale will describe a missed-up situation that the characters find themselves in and three possible reasons why the situation exists. Each tale will include any NPC stats or new game rules for Tech encountered, so you can pick it up and make your player’s life interesting.

It costs £5, but it is included in the following pledge levels to make it easy to add to your pledge.

Make sure that you are backing at one of these levels if you want a copy.

Also, Planetary Systems Architects and Domain Controllers get the opportunity to suggest one or five Cyber Monday Tales, respectively. I will contact you in Early March to get a title + a quick description of the situation as part of the Backer’s Survey after the campaign closes and funds are collected.  Currently, to date, we have thirty tales due to the generosity of the Kickstarter backers.

This add-on is in pdf format, except for Domain Controller who will receive it in print.