A scenario/sourcebook for Crypts and Things, Swords and Wizardry and other OSR Games,  using the ‘Shattered Lands’ setting.  A complete mini-campaign for four to six characters levels 1-3.

A scenario/Sourcebook for Crypts & Things and other OSR Class/Level based games. It is set in the ‘Shattered Lands’ which can be used as its own setting or easily placed on Zarth.

Quote of The Prophet, before being taken to his execution one hundred years ago in the city state of Miraz.

Miraz the Golden sees itself as the inheritor of the old Lion Empire. It is an oppressive military police state which seeks to dominate its neighbours. Some say the wrath of the gods has been brought down because of its hubris and it is currently stricken by a plague. Its Tyrant looks on from his remote palace, as the victims of the disease shuffle around the streets as newly-risen zombies. While his heirs fight amongst themselves to see who will succeed their father, once he is toppled by the rebellion that is fermenting in the streets.

Into this madness step the beginning adventurers, out to make a fortune and a name for themselves.

This scenario/sourcebook features four adventures and information about the city-state of Miraz and the setting of the Shattered Lands. It is an epic self-contained mini-campaign that is designed to be picked up and played or be a mine of ideas for a Gamesmaster looking to adapt it to his/her campaign.

Converted and updated from the OpenQuest version of the adventure book, with entirely new art by David M.Wright. 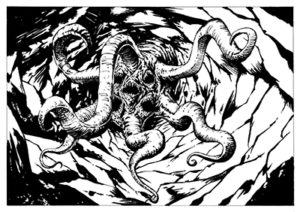 Contains
A Travellers Guide to the Shattered Lands. A brief overview of the setting with History, cultures, religions and example character background. Enough for a GM to use the setting without clipping the wings of inspiration.

Joining the Guild of Treasure Hunters. A very short adventure to introduce the players to the setting.
The Dust of Eternity. A classic raid upon a Sorcerer’s tower with a twist.

Dead Pot Country. Enter the ancient ruins of the River Valley Civilization in search of a missing Merchant.

Life and Death. Journey to the tyrannical city of Miraz and stop the plague of Undeath that afflicts it. This multi-part advnture takes the player characters from a night of suspicion in the village before its gates, through the city itself and up into hills and the Iron Mines where a revolt and worse terrors are fermenting.