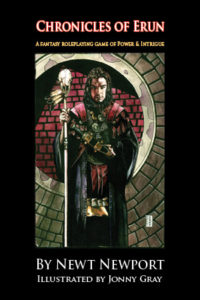 Once upon a time a young UK Roleplaying Publisher called Newt contacted a selection of artists asking if they had any existing art that he could use for “fantasy game products yet to come!”.  Jonny Gray and upcoming UK Artist answered the call and provided many character pieces of such dark charismatic power that Newt abandoned his original idea of quick monthly generic pdf products, and started to write a character driven fantasy epic inspired by Shakespeare’s Histories and Tragedies and the darker moments of British History.

This is….The Chronicles of Erun, a primordial land of mist and rains, tormented by a recent war against an inhuman enemy and a past of fractured mythologies. The character’s start at the bottom of Erun’s hierarchical society and through heroic (and not so heroic deeds) move up through society to become movers and shakers. This happens in three clearly defined acts, provisionally entitled “Back from the War”, “Wardens of Parliament” and”Lords & Ladies”.

That was years ago, and Newt has turned increasingly gray-haired as a result of his publishing endeavours, and Jonny has successfully been to Art College, and illustrated such book’s as Starfall (for Dr Mitch another D101 collaborator and some say power behind the throne).  Systems have come and gone in development, but the setting and characters have endured, so along with Jonny’s original art a great chunk of that is already done.  With other more pressing concerns (such as Crypts and Things Remastered and Monkey 2nd Incarnation) this project moves on at a snail’s pace, but with every small stat block completed we inch closer to a release sometime in 2016.

The Chronicles of Erun coming some time in 2016