Hunters of Alexandria is a roleplaying game in an urban fantasy setting, but one set in the ancient rather than the modern world.

Players take on the role of members of a small monster hunting organisation, the Venatores, in the city of Alexandria, in the year 1AD. The Emperor Augustus rules Rome, and Alexandria has been under direct Roman rule for the last 30 years. Monsters, ghosts, sorcerers and things that go bump in the night all threaten the people of Alexandria.

In this 110 page A5 book we present complete rules for character generation and play, and details of this mythic and monstrous version of ancient Alexandria, including different factions at play in the city, the geography of Alexandria, supernatural beasts, scenario seeds and a complete introductory scenario.

The book is designed to be lightweight and easy to absorb. It is suitable for immediate sandbox play (with a full cast of supporting non-player characters detailed as well as the city itself) and also includes a full introductory scenario (Saviour Gods). It comes with four example characters so you can start running the game after reading.

Now available in pdf format, with print to follow, on DriveThurRpg.com

Hunters of Alexandria in a Nutshell

The game uses the Fortune System, a light version of the Fate rules , influenced by the Jadepunk RPG . It provides a straightforward approach to resolve tests and conflicts in historic fantasy settings.

The game comes with four pre-generated player characters so you can pick up and play!

Meet Pelagon a student at the Musaeum, obsessed with knowledge of all sorts.

The Great Lighthouse of Alexandria is a shining beacon in the night, which guides sailors safely into port. It is also a highly magical place, thanks to rituals performed by its architect when it was built. It is a beacon of light that prevents the forces of darkness from invading from the sea. Miraculously, given all the violence of Julius Caesar’s arrival forty six years ago and Augustus’s subsequent toppling of the Ptolemaic Dynasty thirty years ago, the Tower has endured. Now a dark force within the city wants to see the tower destroyed, so that powerful masters may secretly avoid its revealing gaze and settle in the city.

Saviour Gods is an introductory scenario for Hunters of Alexandria. It is intended to give a firm grounding for both players and games masters in the setting and the rules. 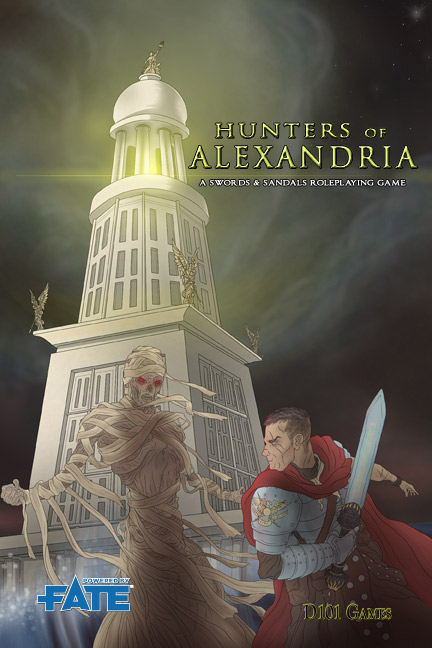