Tomb of the Necromancers Released! 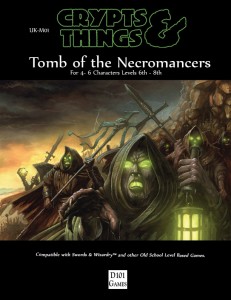 Tomb of the Necromancers cover by David Michael Wright

“The ruins of the Unknown City stand at the edge of the Death Wind Steppe, surrounded by the foothills of the Wolf Head Mountains. They are a monument to a once mighty city. Few now know the city‘s history, and how it fell. The city‘s old name, Tetronis, now belongs to a village of simple fisherfolk standing amongst the ruins.

The force behind both the old city‘s greatness and its destruction was the god Orlusz.”

A swords and Sorcery romp for four to six characters of level 6 to 8. It takes place in the frozen north of the Continent of Terror, and sees the characters pitted against ravaging barbarians, who seek an ancient weapon for their mistress. Further exploration leads them to the forsaken temple of an evil sect of Necromancers.

Although written for Crypts and Things it is compatible with other Old School Class/Level based games.

25 pages long available now in print and pdf via DriveThruRpg.com