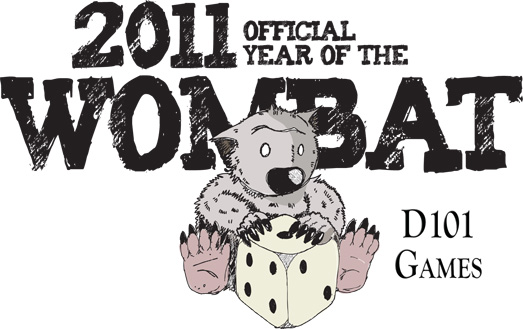 Wombat
The rules for Monkey were originally a fork of a system that I call Wombat, which used a single D6 as a randomiser instead of cards.  Now that Monkey is out and about, I’m working on Wombat to make it into a light weight rules-wise but immersive play-wise story telling game, that I can use as a quick in-house system for a variety of ideas I have. Currently in Alpha, but aiming for a October (Furnace release).

Monkey
I’ve got to visit my tranquil cloud retreat and hammer out the adventure book The Ministry of Thunder at some time in the near future. Also promoting the game is high on my priorities list. Considering a spin off game of more earthly Martial arts malarkey. BIG HUGE PLANS for Monkey in 2012, which need working on this year.

OpenQuest
2010 was definitely the year that OpenQuest proved it has wings. 2011 should see it soar into the stratosphere of gaming greatness

Here be Dragons (By Simon Bray and Paul Mitchener) – A full island setting, where Dragons and their kin rule the human settlements, exploring the “interesting consequences of that” (as co-author Paul Mitchener puts it). A sand box setting with full adventures to get you started. Expect a full preview when the full draft is in my hands in a couple of weeks time, but its exciting stuff. eta Late Summer/Early Autumn

More stuff (by Me)– All this is a bit blue skies at the moment, but I’ve started writing scenarios again and I’ve got a couple of old scenarios that with a bit of freshening up and conversion will fit in nicely

I’ll expand on this as I’ve got more definite plans, but you’ll definitely be seeing more OQ stuff from me this year.

The Company (By Rik Kershaw-Moore)
Currently in final layout for a Feb/March release. After its release the author is going to be supporting it with a series of Pdf releases called “The Red Book”.

River of Heaven (by John Ossoway)
Currently in internal playtest with its Author John Ossoway. Working for a final release in quarter 4 of this year.

Wordplay
Big news here is the game’s author Graham Spearing is back working on the creative commons version of the  game after an abortive attempt at a commercial release. He’s updated the rules slightly to version 1.3, which is due an immanent release in its plain text version via his Wordplay Games imprint. As a result I’ve withdrawn “Wordplay: Basics” from Drivethrurpg.com, since I strongly feel that its up to Graham to be the single point of truth about the core rules. Expect to see Graham pop up here more regularly in support of D101’s efforts.

Despite working on my own narrative game, Wombat, I still have a strong commitment to Wordplay because its just so much fun to play

Of the many games I’ve played over the last three or so years, all of them have been a wonderful experience, even when we’ve been playtesting the rules and ironing out the wrinkles.

The Big Five: Expanded Edition
This book is getting a slight make over. Its being resized to a more manbag friendly 6″x9″ size. Its being updated to the latest version of the core rules 1.3 (which in a nutshell has updated difficulty settings, scale rules and new optional rules for ‘Nudging’ failed dice into successes). The Empire Gatan theme will have an adventure “The Road Less Travelled” and the book will gain its 5th Theme Paul Mitchener’s “The Drowned Lands”, a very British Post apocalyptic setting in the vein of John Wyndham which is also a sandbox adventure. For me the Expanded Edition puts all the Wordplay goodness me and my group have been playing with for the last couple of years in one easy complete portable package. If you have the current A4 version, a two page errata will be released to bring you bang upto date with the minor rules changes. Eta Mar/Apr.

Project Darklight: Cyberpunk roleplaying in the 23rd Century
This is my take on Cyberpunk, bringing it bang up to date and using the Wordplay system to create a fast moving sci-fi thriller. Currently in internal playtest with my group. Eta second half of 2011.

Expect more Wordplay releases from D101, there’s a couple of other releases that are still in draft stage that I won’t mention until they are complete.

HeroQuest
The bad news for HeroQuest fans is that after the current crop of releases that is it. After much soul searching I’ve realised that I just haven’t got the time physically to carry on supporting HeroQuest to the standard I would like.  This means that there will be no more Ye Book of HeroQuest Fantasy pdfs or Hearts in Glorantha issue 5.

The good news is, that before we throw in the towel there’s still allot of goodness coming your way in 2011.

Ye Little Book of HeroQuest Fantasy – a print version of the pdf’s …Monsters and … Dungeoneering. Considering expanding Dungeoneering to include more examples of ready to use magic items, spells and more ‘class’ keywords.

…and talking of Gloranthan releases.

Book of Glorious Joy by Jamie ‘Trotsky’ Revell.  I’m  pulling out my finger here for a Feb/Mar release.

Gloranthan Adventures: Red Son Rising Text is being polished up and art is being drawn for a Summer release. This will be D101’s final Gloranthan release.

Albion Adventures
This my old skool Labyrinth Lord project, which I’m basically doing for the fun of it. Currently working on a setting book and a couple of advnetures to follow it. No idea when it will get done, it will probably be one were I wake up one day and decide it is done, but I give tantilising glimpses over at my Old Skool Blog Sorcerer Under Mountain.